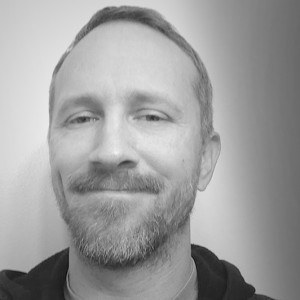 Dave, always good to talk to you. Your concepts and design are both nightmare fuel and an amazing resource of inspiration for people to draw from. Speaking of, why do you draw in the first place?

I’ve actually got two reasons, one, I’d have to say it’s an addiction, a very strong one. It’s the best way to escape the trials and tribulations of the real world and create something in the process, beats the heck out of any drug. Second would be that I love to see how far I can push myself not only in terms of skill, but in terms of what I can present to the world. If I can help someone enhance their own imagination or at least take them somewhere else for a minute, then I’d say I’m succeeding as an artist.

What would you say was the impetus of you wanting to do what you do? Was there some moment in your life? Some art or media that fueled your passion?

Movies and books, especially sci fi and fantasy. Directors like Spielberg, Ridley Scott, and authors such as Stephen King and Robert McCammon, all played a role as the architects of my imagination and the builders of my foundation and fascination with all things imaginary. I used to read all the time, and the more fantastical the story the better. I would imagine myself in those worlds so intently that it would be comparable to dreaming. I didn’t actually take art very seriously until about the age of fifteen. I’d doodle and draw skulls and dragons, not really sure if it was just a way to pass the time, or because I wanted to get those ideas out of my head, but eventually it led to a sort of creative fever. Now I’m completely hooked. And I hope I never come down. 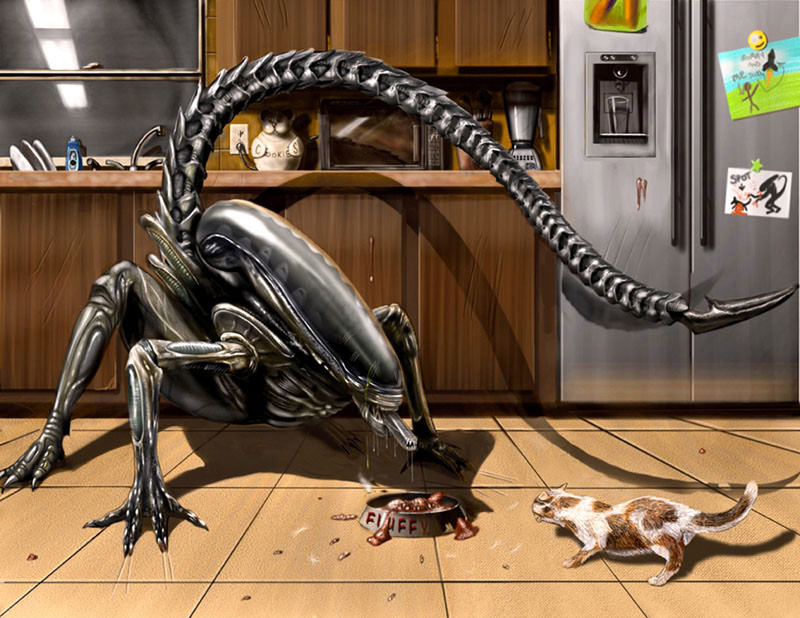 I think your fan base would echo your hope to never come down. You do great work and inspire a lot of people around you! What advice would you give to someone that is just starting out in a career of art or design or someone that is wanting to get started but is clueless about how to go about it?

Well, there is the old adage, “Practice, practice, then practice some more” which is entirely true, but that one should be a given. Not exactly something I have to tell aspiring artists and designers. One thing I will say about it though is that Art and Design are two different things, the common bond being the aesthetic. Art definitely comes first, not only technique but understanding the foundations, something which takes a long while to master. But while you are practicing, you can certainly begin to think about the design aspect as well. I always try to instill in my students the desire to create something nobody has ever seen before, something which fueled my own creative pursuits from an early age and has served me well in distinguishing myself and my style.

There are of course the obvious routes one can take in entering this field, school, mentoring, talking to professionals and learning from peers online and in person, along with watching videos on technique and rendering. The important thing is to realize your faults and be humble in your station as an artist, and move forward learning from your mistakes. One thing I see far too often is the eagerness to progress without taking the necessary steps to actually get better as an artist and designer. Take your time, get good at something in particular, then when you’re ready, jump in and see what all of your hard work has done for your standing as an artist.

Well, even with that, I’m sure even masters of their craft such as yourself suffer bouts of self doubt or even moments of wanting to put your work in the trash. How do you get past that?

Grit my teeth and continue. A long time ago I realized that nothing I do is precious, no matter how good I think it may be. I have moments of doubt all of time, but what artist doesn’t? The good thing is that if I do want to throw something in the trash, chances are I’ll end up doing it ten times as well the second or third time around. When it really gets to me, I just stop. Give it a few days then come back at it with a renewed hunger to make it work.

You have made quite a great niche for yourself with doing art for all sorts of channels like video games and entertainment design. Did where you find yourself today in your craft surprise you?

Yes and no, I’ve been doing illustration for over twenty years, so I’ve had to work really hard for a long time to get where I am now, which ironically is not quite where I ultimately want to be. I have had some surprising moments in the reception of my work though, mostly through random articles, magazine and online, and seeing my art show up in different languages around the world has been a pretty nice surprise.

I bet! What is the general process you use to go about to go from idea in your head to amazing illustration? Do you have a favorite part of this process? More interestingly, do you have a least favorite part…and why?

My process is somewhat standard, thumbnails, sketching, sometimes with line and more often than not with silhouettes. As far as the technique goes, I’m a big fan of changing things constantly, trying not to get bogged down in the first idea that pops into my head, really exploring the options through painting and drawing seeing how many different shapes and variations I can come up with until one of them hits home. When I work digitally, I try to use the minimal amount of layers possible, I think this stems from my time as a traditional artist, but it has helped me to develop my own style, and also has given me the confidence to paint things over and over again. I have two favorite steps, first of which is definitely the detailing. I’m a huge fan of texturing and unique shapes, trying to find the perfect way to demonstrate a material or feeling in a character or creature’s face. The second would be choosing my perspective, going for as much drama as possible without having to do much work. My least favorite would have to be somewhere around the post blocking stage. Finding big forms and looking at things simply has always been a challenge, but I struggle through it so that I can get to the part I love.

It’s really been a treat to have known you when your work was mostly analog and to see you come into your own using the tools of the digital age is really inspiring — especially for those who are using technology as a crutch. You’ve always shown a lot of great movement and form in your illustrations and they do a good job communicating without being too busy. That’s a great balance. Do you have a favorite recent project? If so, can you share some images from it?

Sure, I have two in fact. First was redesigning classic movie monsters. I’ve tackled this subject a few times in my life, but this time I really wanted to breathe new life into characters that we’ve all come to know, love and fear.

“Frankenstein’s Monster” and “The Creature from the Black Lagoon.” 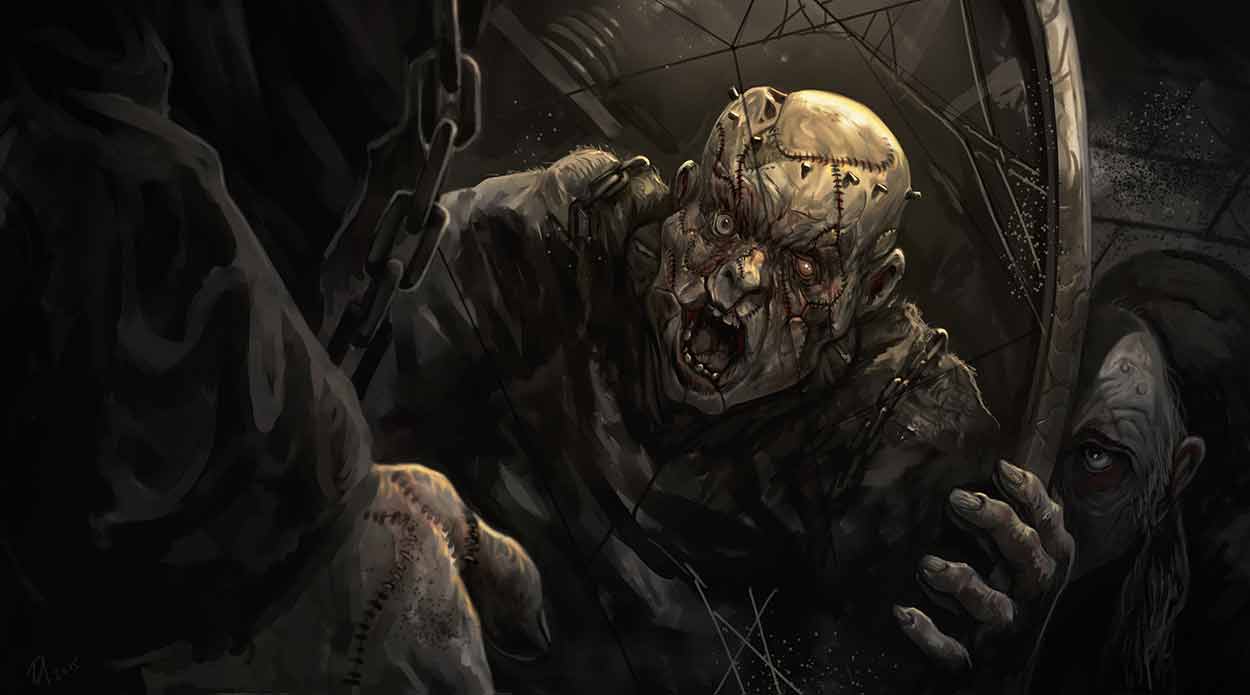 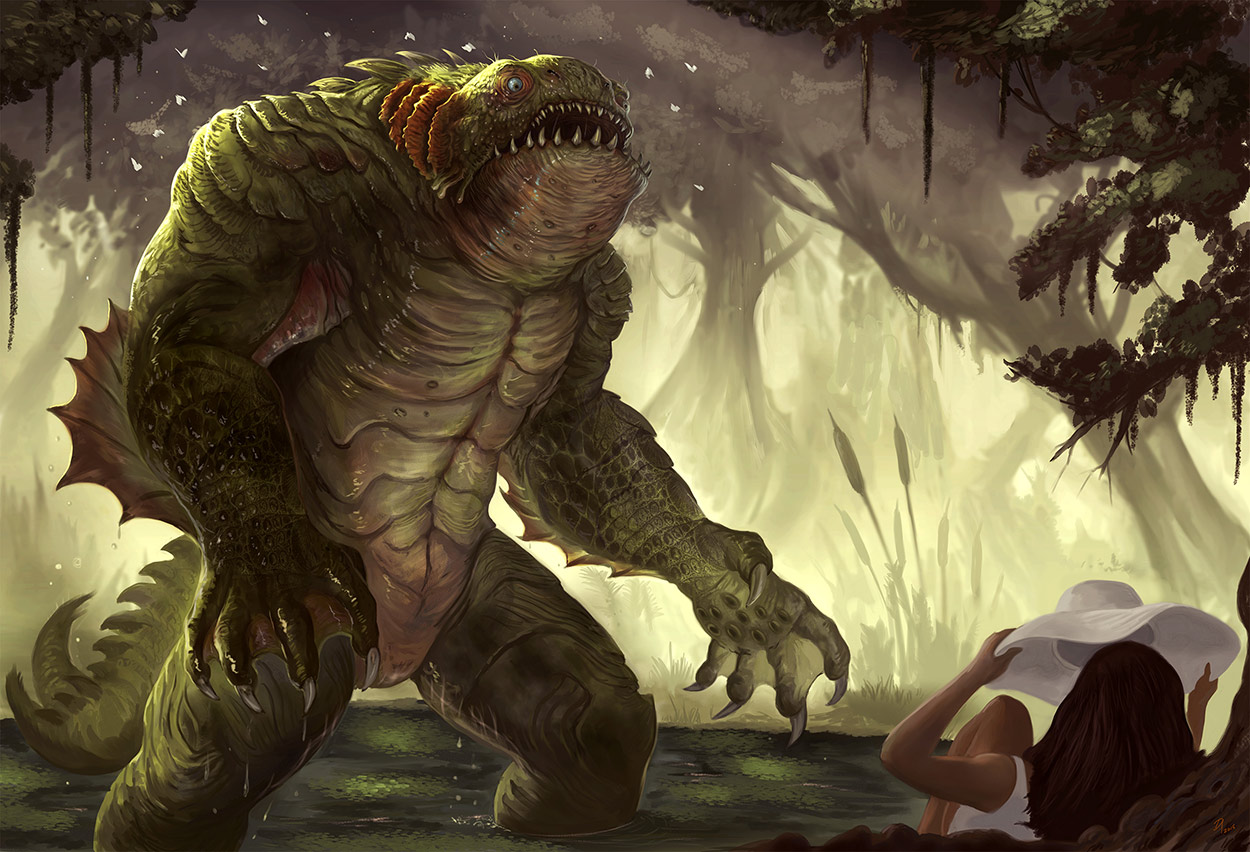 These were two breakthroughs in terms of my technique, and I learned a lot from them. The second project was to redesign characters from one of my favorite stories and films, “Neon Genesis Evangelion”.

I’ve always been inspired by the sheer scale, power and extremely beautiful designs of Japan’s giant mechas. This particular story stuck with me because of its reference to heaven and hell. These are my redesigns of the mass produced Eva, and the angel Sachiel. 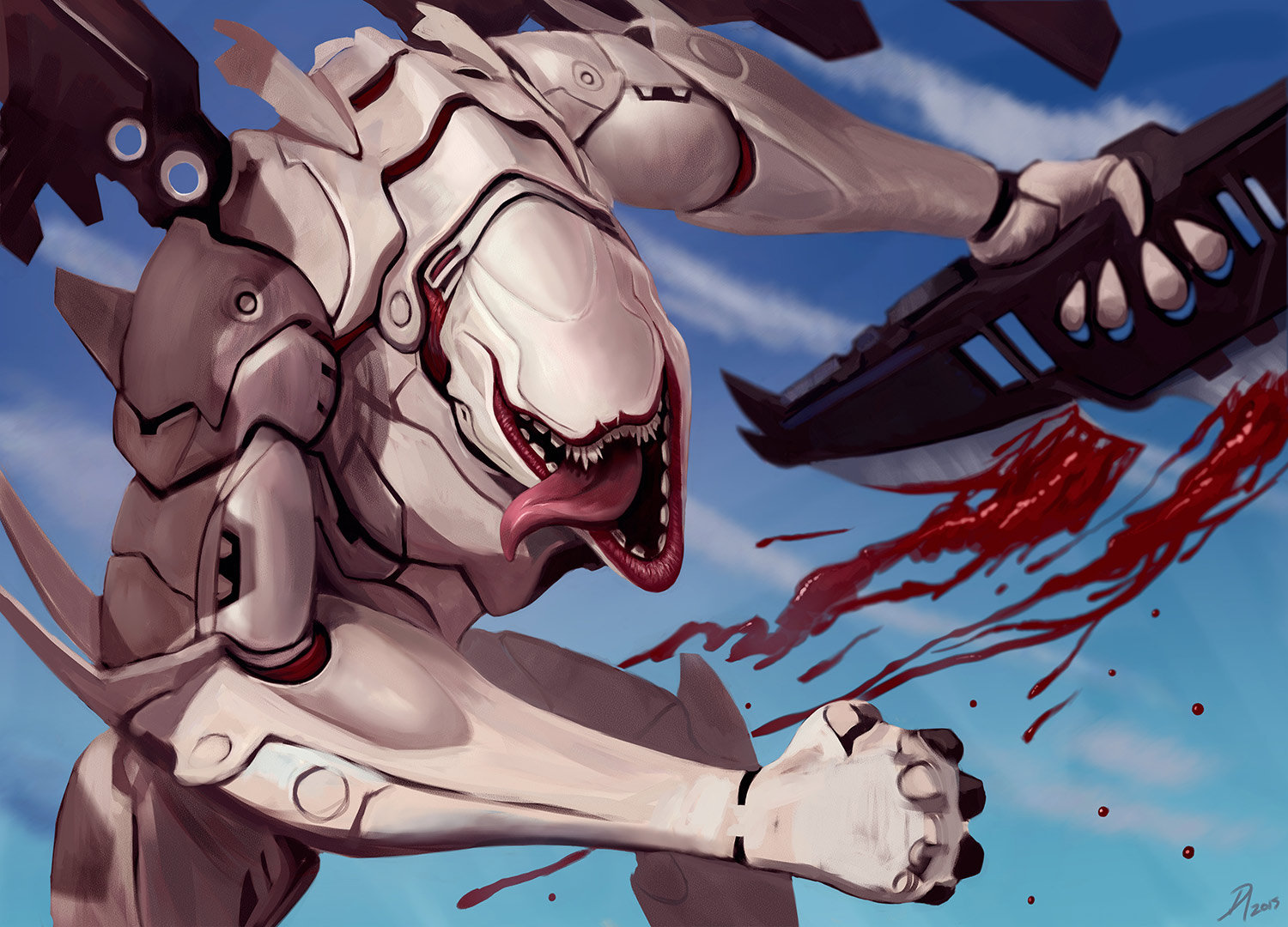 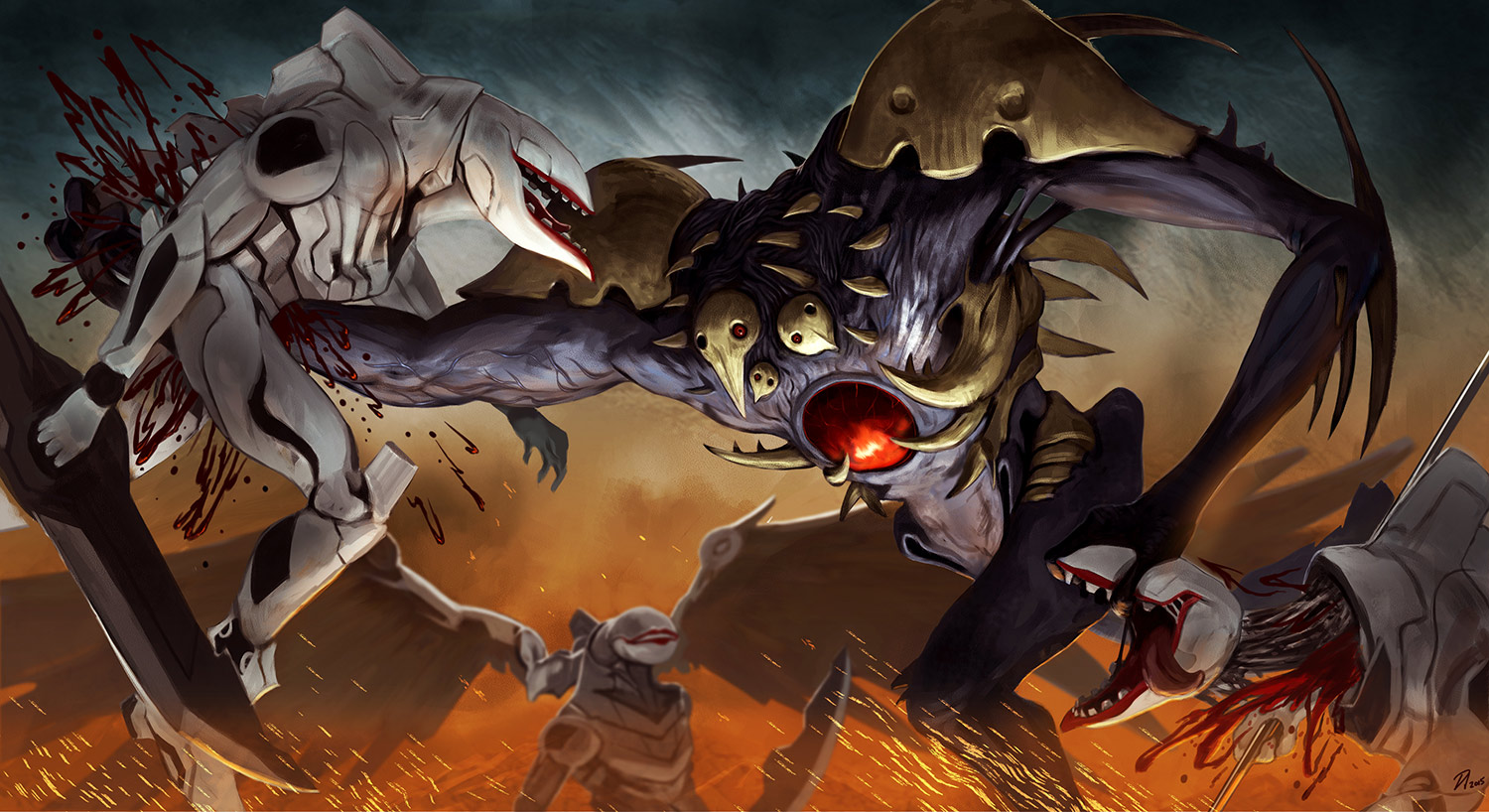 That’s so good! Our friend Don Hogan was/is a huge fan of Evangelion. I love seeing this take on it! Any interesting side projects you can share?

I suppose the most interesting project I’ve been working on for a while now is the creature design for the new game “Ark: Survival Evolved” It’s been a year and a half of prehistoric beasts some of which I’ve never even heard of before. It was quite the learning experience, especially in terms of my own technique. It fascinates me when I hear that the designs of the animals in the game is not what dinosaurs looked like, but at the same time the producers did not want them to look like average dinosaurs. My biggest challenge was to redesign based on something that already exists, and still hold on to the general look of the original. This was a pretty major undertaking in regards to design. Either way, I’m happy with the results, and now I know way more about the prehistoric world than I ever imagined I would! 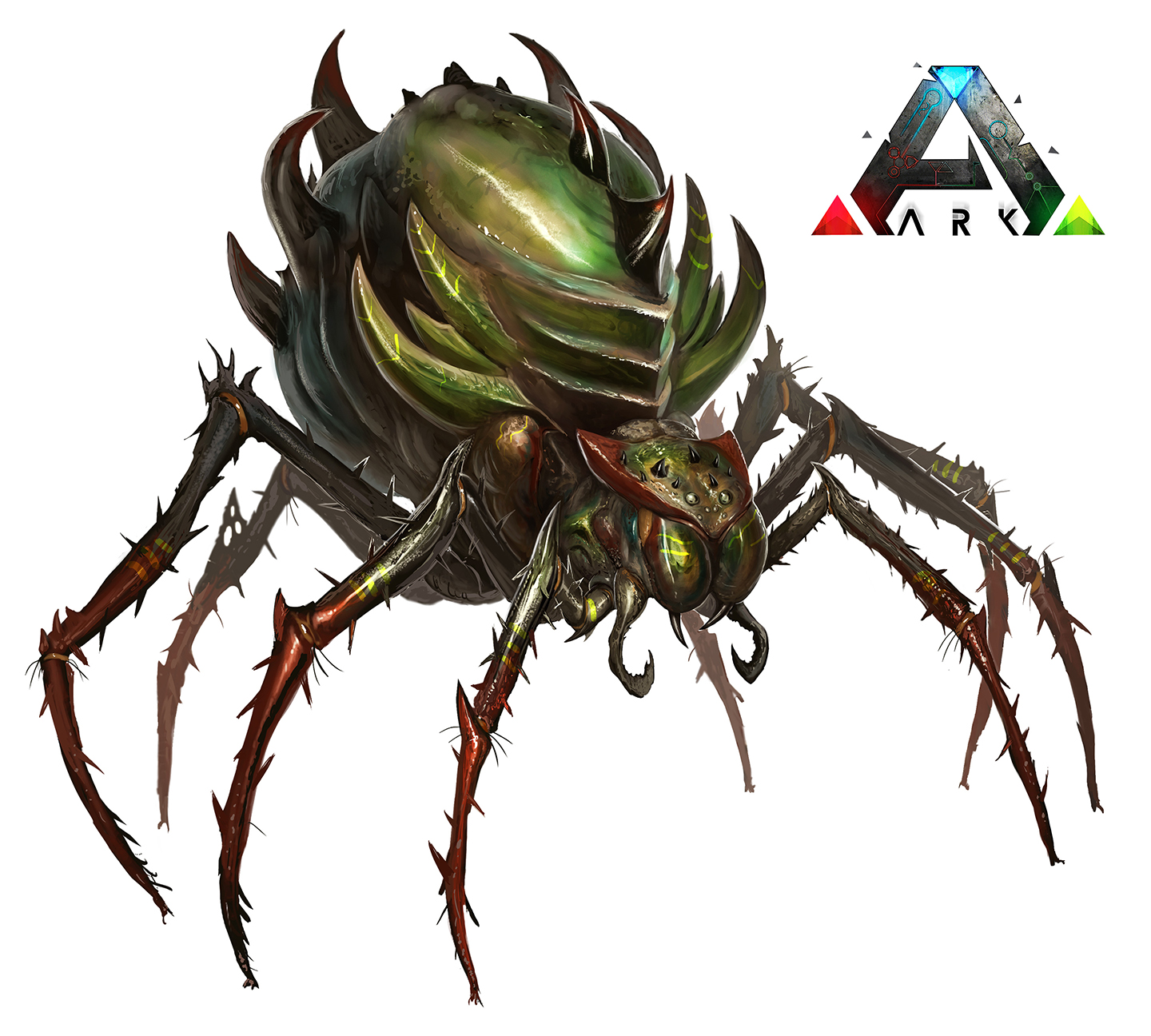 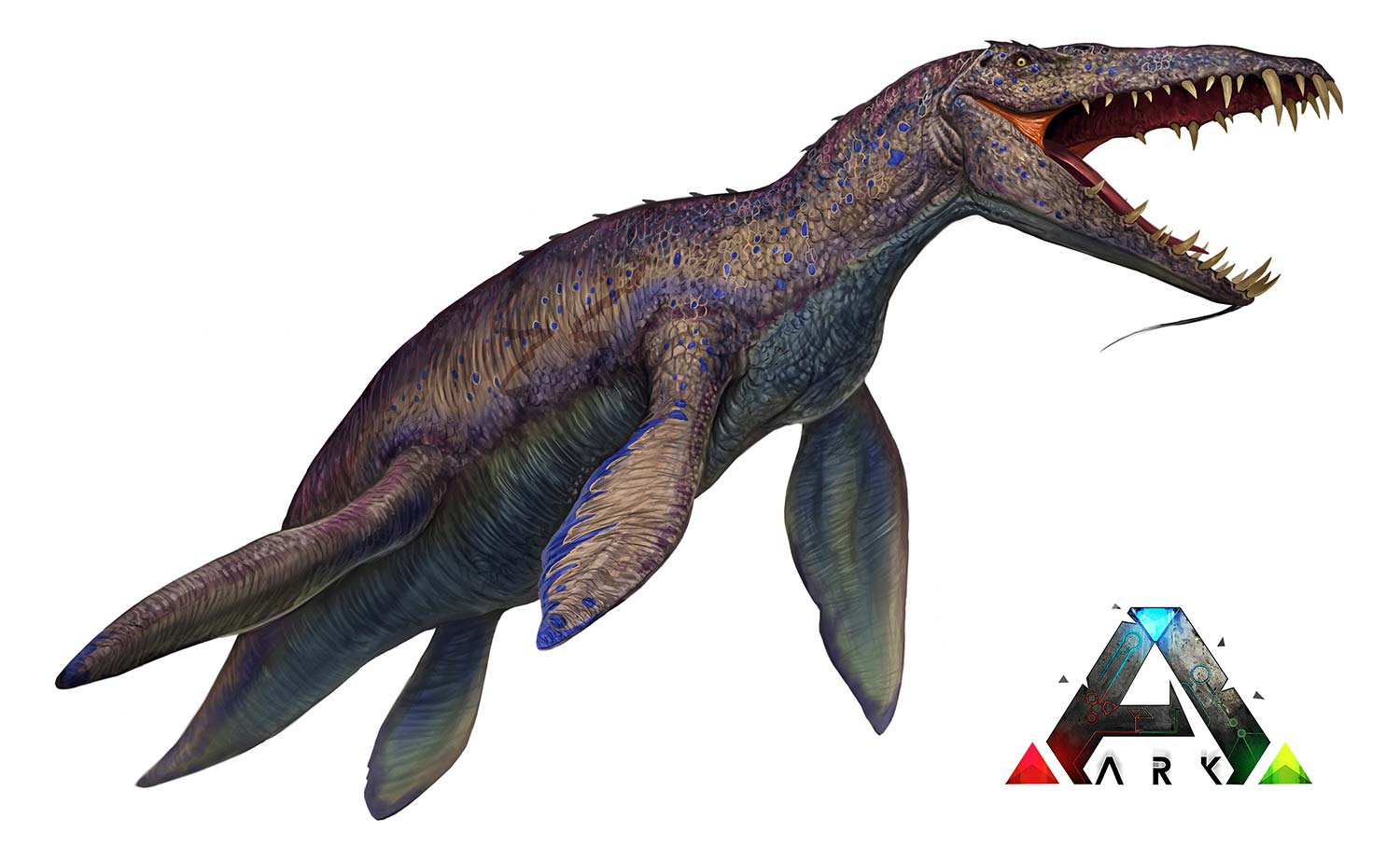 Where can people see more of your work? What links can I share with everyone? Dave can be found on Deviant Art and latest work can be found on his Artstation page. Also, just googling “Davesrightmind” or “Dave Melvin Art” will bring you a whole amazing slew of images from Dave Melvin. Great stuff! 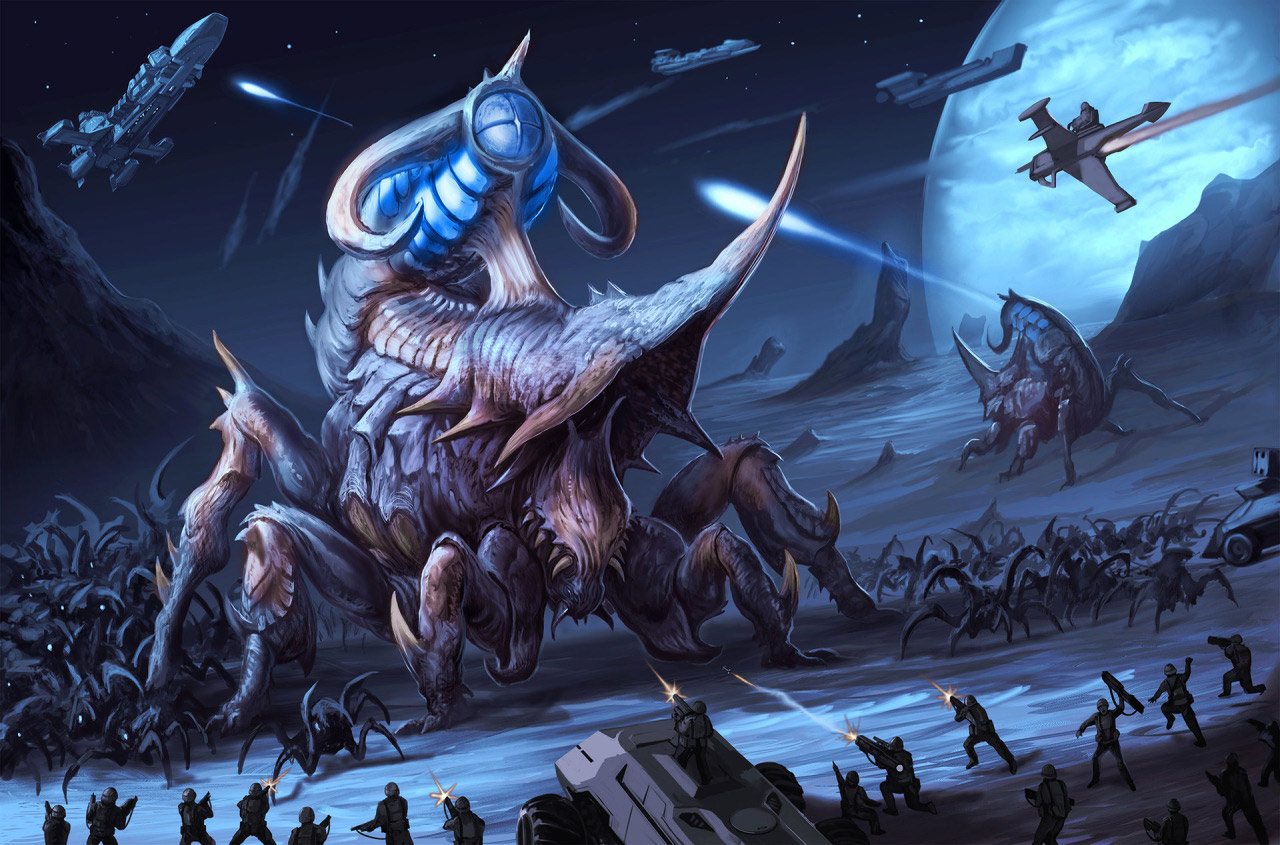 Are you a professional 3D artist or designer? I’d love to talk with you about your work! Reach out to me here and maybe you, too, will be featured in the ProTalk!