Matt Kohr is a freelance concept artist and creator of the website CtrlPaint.com.

Matt, thanks so much for taking some time to talk with me today. Let’s jump into the first question that I think a lot of people would love to know the answer. What was the impetus of CtrlPaint.com?

The topic of ‘video tutorials for beginner’ is something I am weirdly passionate about, but it never went past complaining. In 2011 I had some time on my hands, as I was recently unemployed. I’d spent plenty of time complaining about low quality video tutorials over the years. With this new found free time, why not make my own videos? And so I did. Ctrl+Paint was a frustrated boast, not a business. It was my attempt to say ‘look, beginner’s tutorials don’t need to be terrible!”. The surprising part was that beginners showed up, watched the videos, and started to buy videos in my store. What began a naive, experimental, statement quickly started looking like a business. It took more than two years for me to embrace it, quit my job, and work full-time on the site — but the major elements were in place from day 1.

I remember finding Ctrl+Paint through a series of posts that lead to your LifeHacker Night School series and I was hooked. You make learning fun and inspired me to put PolyPlane together for a very similar reason. I still am floored by how approachable you were and still are. It looks like the content you offer has great breadth to it these days. Where do you get ideas for new videos?

These days it’s a bit harder to decide on video topics, though I didn’t have that problem in the old days. I used to get ten or fifteen video ideas per week in my inbox – readers had plenty of questions. I read their emails, and then ‘answered’ them with a new free video in the library. In retrospect, this production model lead to a very confusing sequence to my videos — it’s amazing that people kept showing up! Now that I have an ordered list for my library, it’s more a matter of filling in gaps.

Listening to your audience is a really important measure for providing relevant content. It was what made me decide to do the whole Intro to Rendering Series.

As I’m sure you are well aware, the original design of PolyPlane was pretty much a direct rip-off of the model that you used originally (design wise). Thank you for letting me lean on you while I figured that all out. What is next for the site?

You’re welcome! Naturally, I’m toying around with (another) visual overhaul. Yes, that’ll make 4 versions in 5 years. The more time I spend around beginners, the more I see their desire for a clear path. So I’m planning to update the site with a clear path in mind.

I can’t wait to see what happens next with the site! You mentioned recently that you are starting to more seriously wrap your brain around 3D modeling. Are you doing this to further work in the concept design arena or do you have a longer term goal in mind?

3D is one more skill that I have a hunch about. There’s no obvious use for it in my current Ctrl+Paint work, though I can see great potential for future Concept Art with it. Despite the lack of immediate utility, my schedule is the most open it’ll ever be right now – so I recently dedicated ~4 months to learning Modo. Was it a good idea? We’ll find out!

Modo is a great tool for modeling! I’m surprised that you didn’t take on something like ZBrush or Maya as they are more for entertainment design useage. I bet you’ll do great though. With that, what advice would you give to someone who wants to concept design and has no idea where to start?

Learn to draw. It’s the most important skill you can have as a designer. Sketching is the shortest path from idea to object. Additionally, the spatial perception learned through drawing provides an essential foundation for both 2D and 3D software. 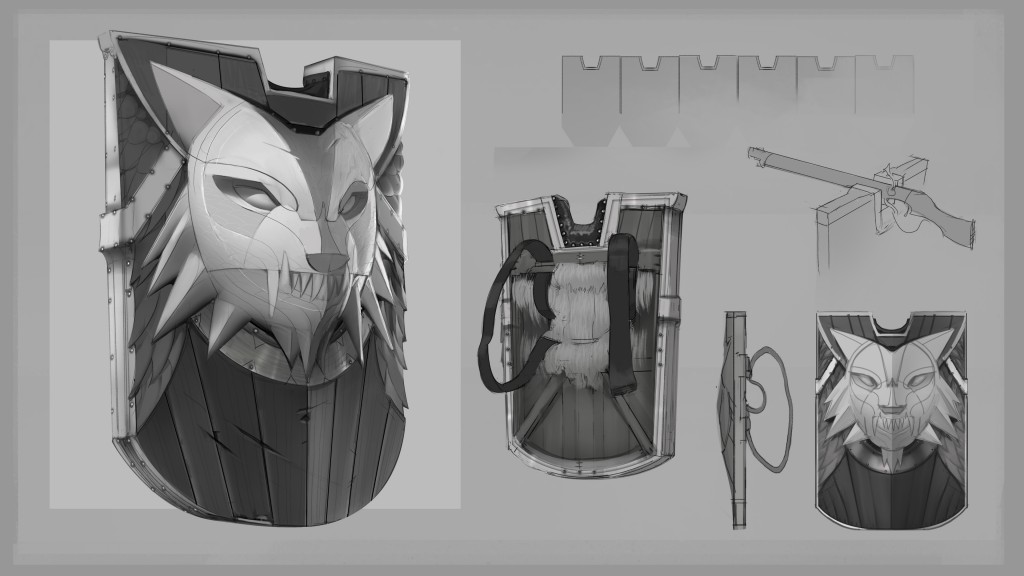 I couldn’t agree more! And after that, what, if any, critical role does 3D modeling play into the actual design process of your project(s)?

It’s step #2. Thumbnails are sketched first, but eventually one is the clear winner. For many designs, my next step is to make a block-out model in 3D, and examine the shape from all angles. Here I’m able to experiment with proportions, materials, and symmetry – things that are harder to change on paper. 3D is not usually my final result, so the model doesn’t need to be ‘finished’ — as my final phase is back in 2D, doing a paint-over in Photoshop. 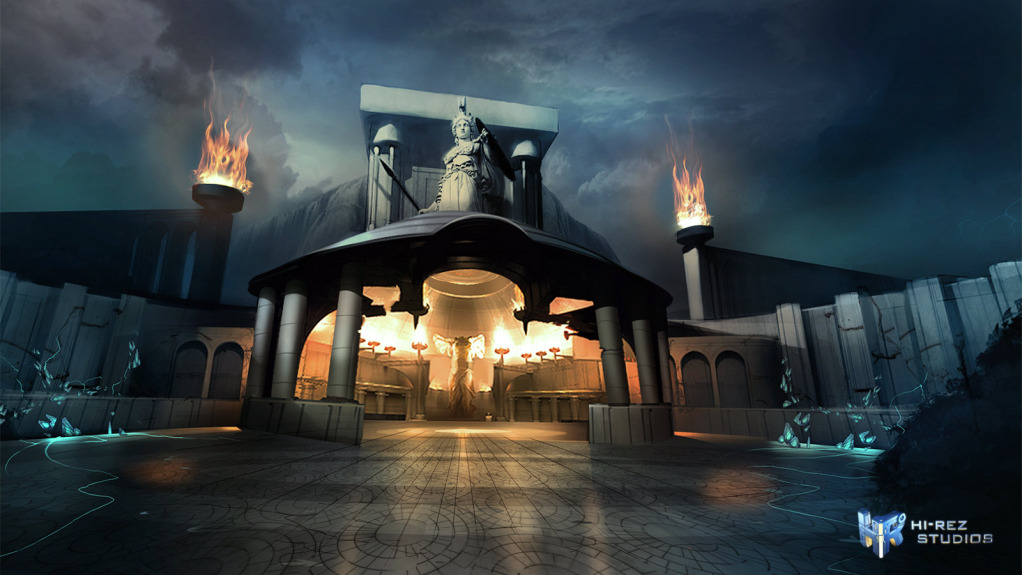 I discuss this quite a bit in Sketch to Model 2…It’s good to be able to rough in your ideas and then slowly pare them back down to a winner. It seems like, from a few of your videos, you’ve shown some great techniques for using models as an underlay to a larger project, but have the models ever been a direct communication with clients or creative directors on a project?

Nope, the models are almost always a personal tool; one step in the illustration process. Occasionally I’ve been asked to share my model files with the game artists, though they’re only being used as modelling reference — not as game assets.

Do you have a favorite recent project? If so, can you share some images from it?

I had a fun assignment recently designing blackpowder weapons. This was a great opportunity to use 3D as part of a the design process – I painted multiple views, and consistent proportions were essential. In this case the model was basic, and the textures were flat colors – so all of my detail was established in Photoshop. 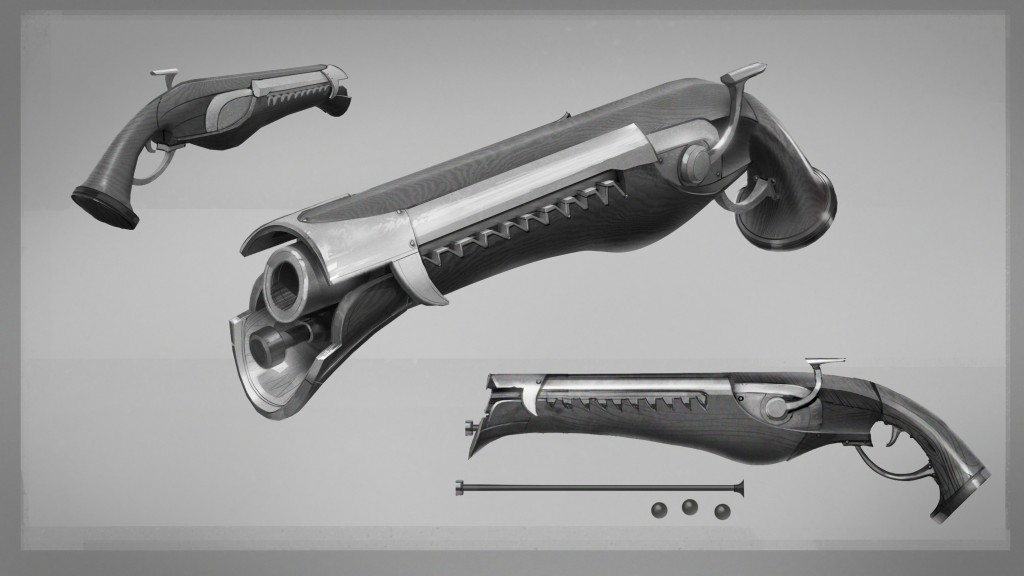 I would do it in the exact same way. I’ve sifted my gaze from animation to concept art, and now toward education and storytelling. Now I find myself with a wide and unusual skillset! What fun! If I had aimed directly at education from the start, I wouldn’t know how to paint dragons. The big question in my mind is: what’s next?

You moved a while ago to where you are now. (Still Seattle, right?) How much of that move was determined by the industry?

Seattle is a great city for game development. We moved for a variety of reasons – but it’s certainly up there on the priority list.

So many awesome folks in Seattle. They are at a loss for recently having Ben Nicholas decide to move to Europe. You’re super talented at reducing complex concepts and techniques in simple ways. Not so much a question as a thank you. The internet is better for people like you. Thanks again for taking the time to chat on education and design and your approach to your craft!

Thanks so much for the interview, Gabe!

Matt can be found on the web at mattkohr.com and ctrlpaint.com. You can also follow him on Twitter and “like” CtrlPaint.com on Facebook. I also recommend you check out the store page of Ctrl+Paint when you have some time and consider picking up some of Matt’s videos…they are totally worth it and really affordable!

Are you a professional 3D artist or designer? I’d love to talk with you about your work! Reach out to me here and maybe you, too, will be featured in the ProTalk!