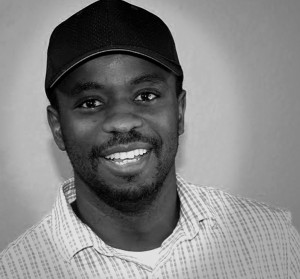 Sindiso Nyirenda has been a long time supporter of PolyPlane.com

Sindiso, thank you so much for taking the time out of your schedule to talk to me and be the first person to be featured in the Reader Highlight section! How the heck did you first get into 3D modeling?

I think it was around 2005 when I first tried my hand at 3D. I remember going through several books on the subject. I did not make a lot of progress at the time partly because my motives were all over the place: It was more of a fascination with the software capabilities rather than any meaningful application. Honestly I wasn’t doing the kind of work that needed that ‘extra dimension.’

However, by 2010 I had completely evolved as an artist and designer. The work I was doing increasingly involved product and graphic design; areas that could only benefit from the use of 3D. The learning part was initially cumbersome but I stuck with it because I knew it the payoff was ultimately going to be worth it. Fortunately, by the time I got serious about 3D there were so many resources available online, and the software itself had become more intuitive and relatively powerful.

2012, in comes MODO. For the first time I felt like I wasn’t fighting the program – the interface, functionality… Everything just seemed to make sense to me. Finally, I could just focus on creating content!

Do you have a favorite time of day to model? Or is there something that prompts your schedule for modeling and designing?

Not really. I have a traditional art background and when I’m doing that kind of work, I can go from sunrise to sunset. I have the same attitude towards my digital work – If I’m excited about a project and I have the time… I’ll work. 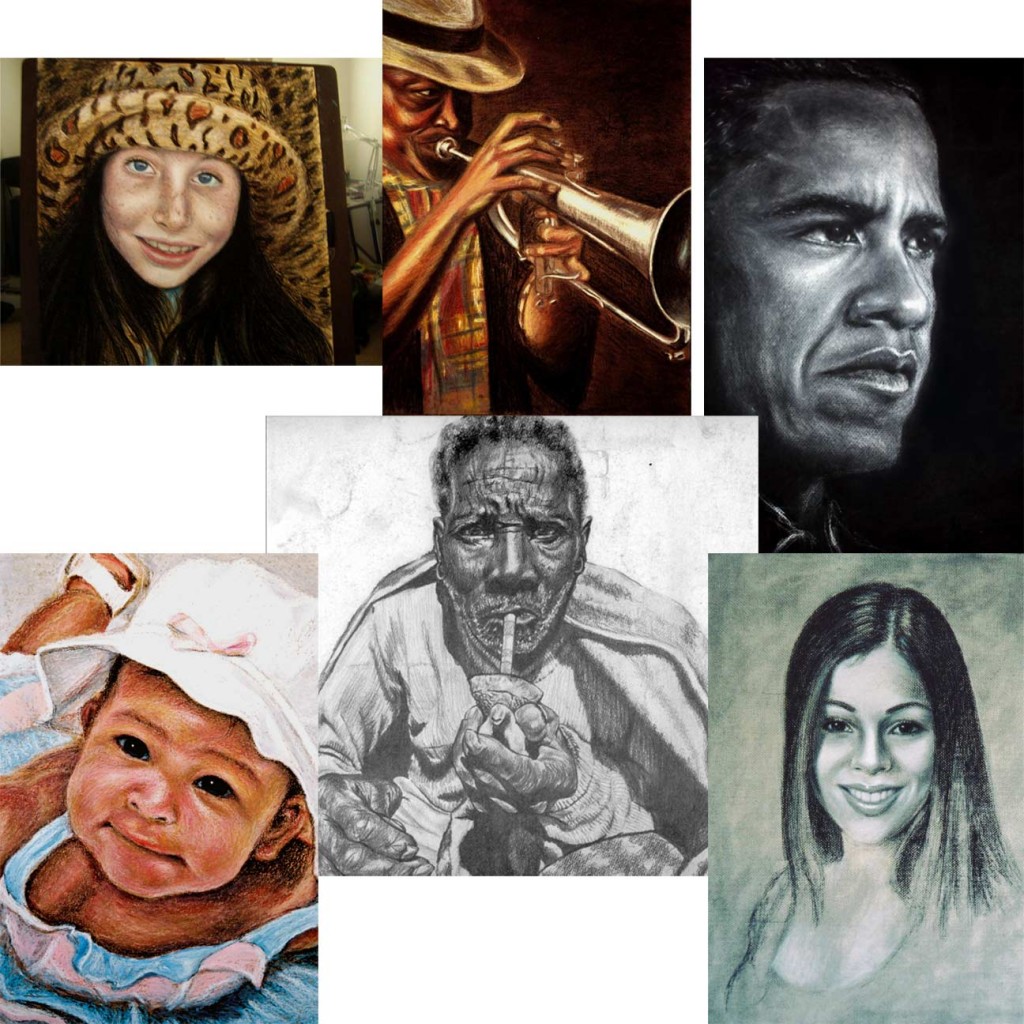 Your traditional media as it relates to portraits is really great! I’m glad you chose to take on learning 3D modeling. What was it that made you want to learn 3D modeling?

Necessity. I just wanted the best possible way to present my ideas. I knew early on that sketching and rendering the traditional way could only take me so far. I get the feeling that your question is also insinuating at what my inspiration was? Well I’ve always been fascinated by 3D in its various forms. Movies and TV commercials (Audi Q5 unboxed, 2008) were definitely a source of inspiration for me. For instance, do you remember the feeling you had after seeing dinosaurs in the first Jurassic Park movie? Most people will end at ‘Wow, that was cool!’ For some of us, however, that’s only the beginning…

Very true! I had made a declaration back in 4th grade that I wanted to be a “sketch artist” and pretty much followed that course until I eventually started Con Cor Design back in 2003! It’s amazing how media influences the direction for people. So far, what has been your favorite part about learning 3D modeling?

I would say modeling and lighting. Modeling to me is like solving a jigsaw puzzle – what fits where, how many quads or n-gons? Lighting in 3D is like having a virtual studio at your fingertips, and its importance in cannot be overstated. Nowadays I find myself reading about lighting and photography because the principles are the same and the techniques translate well into most 3D render engines.

What are you going to use 3D modeling for?

Mainly product visualization and perhaps use some of those assets for animation. 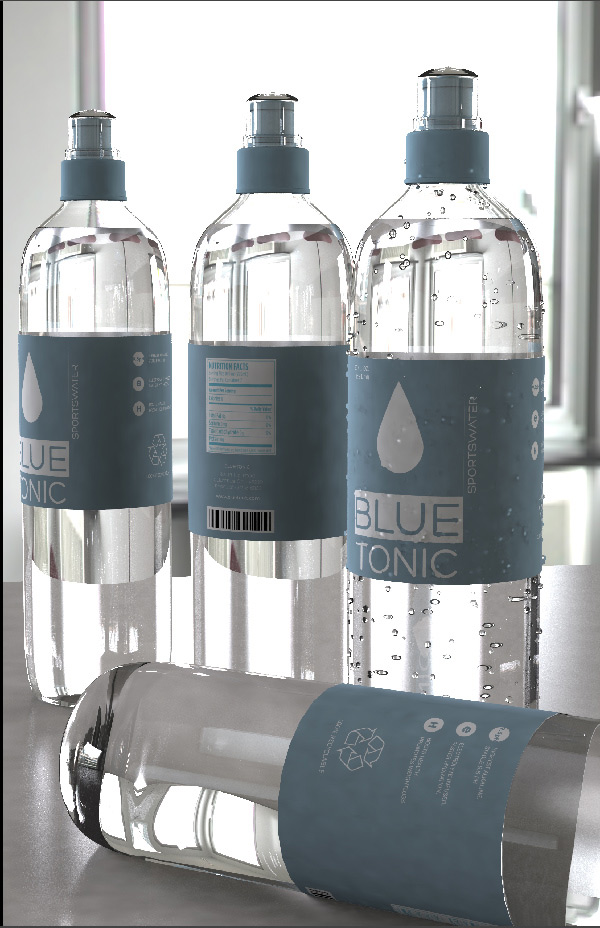 The shots you sent me show me that you’re well on your way in doing just that now. So in 3 years, where do you hope your modeling will take you in your career?

Interesting question because I don’t quite consider myself as a modeler/3D guy but rather a designer who happens to be proficient in 3D. I do have some plans but more importantly I hope to be in a situation where I’m working on exciting projects that I believe in.

You do some awesome shoe designs and models. Any chance you are going to work for a company like Nike or Adidas?

Oh thank you for the compliment. As for the second part, we’ll see. Those are both great companies. You can add New Balance and Brooks to that list. They are all on my radar, and they are all putting out some beautiful work. 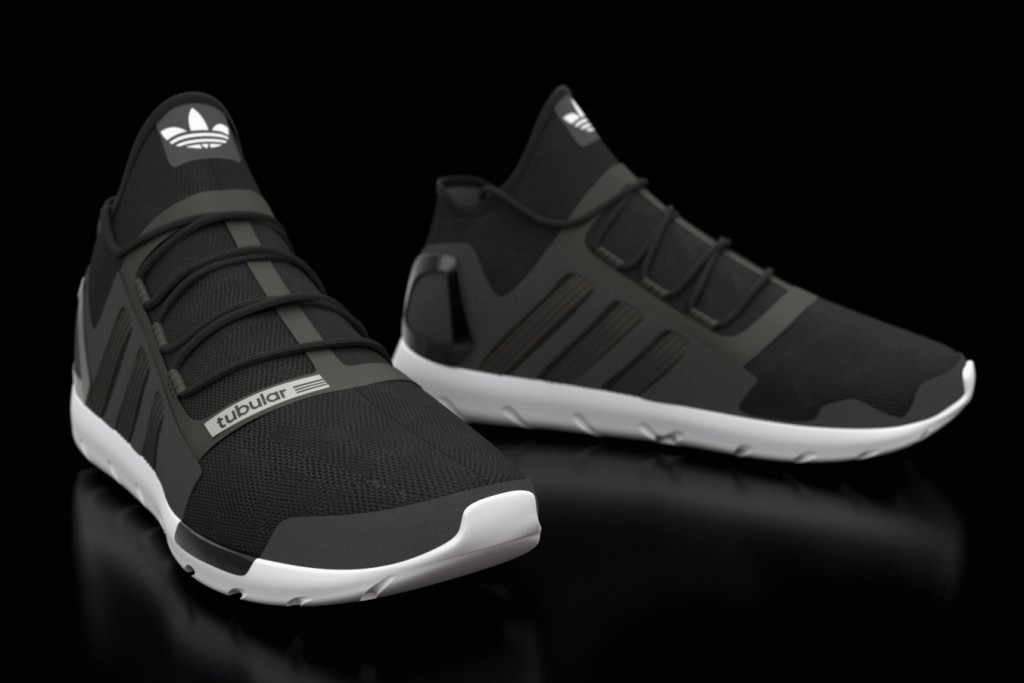 You mentioned in a previous conversation wanting to eventually own your own business within the shoe design industry. What do you think are your 3 biggest hurdles to get there and what are you doing to overcome and accomplish that goal?

Getting out of my comfort zone: The thought of starting a business can be extremely daunting. I think most of us are trained to follow a certain ‘safe’ path when it comes to our careers – get a good paying job, put in your time, hopefully climb the corporate ladder along the way etc… Getting away from that kind of mindset is probably the biggest challenge. I believe that everything after that is mostly about finding the right connections and providing a service or a product that fulfills a need/void in the industry.

At some point it becomes a philosophical question – ‘what motivates you?’ It could be a myriad of things; fear, money, power, service… The list is endless. Ultimately, I just want to create something useful to people. Good examples in footwear would be the barefoot movement which challenged the idea of having a padded/thick sole… Not forgetting the Crocs fad, which I personally didn’t care for but at the same time their colorful clogs made so many people happy. Both make for great case studies.

That’s a really awesome perspective. I am really humbled by your drive. I think as long as you keep your eyes on practicing your craft, you’re going to make something really incredible and profound that will help you achieve your goals. I’d never considered the Crocs example you mention. I never thought about it like that. 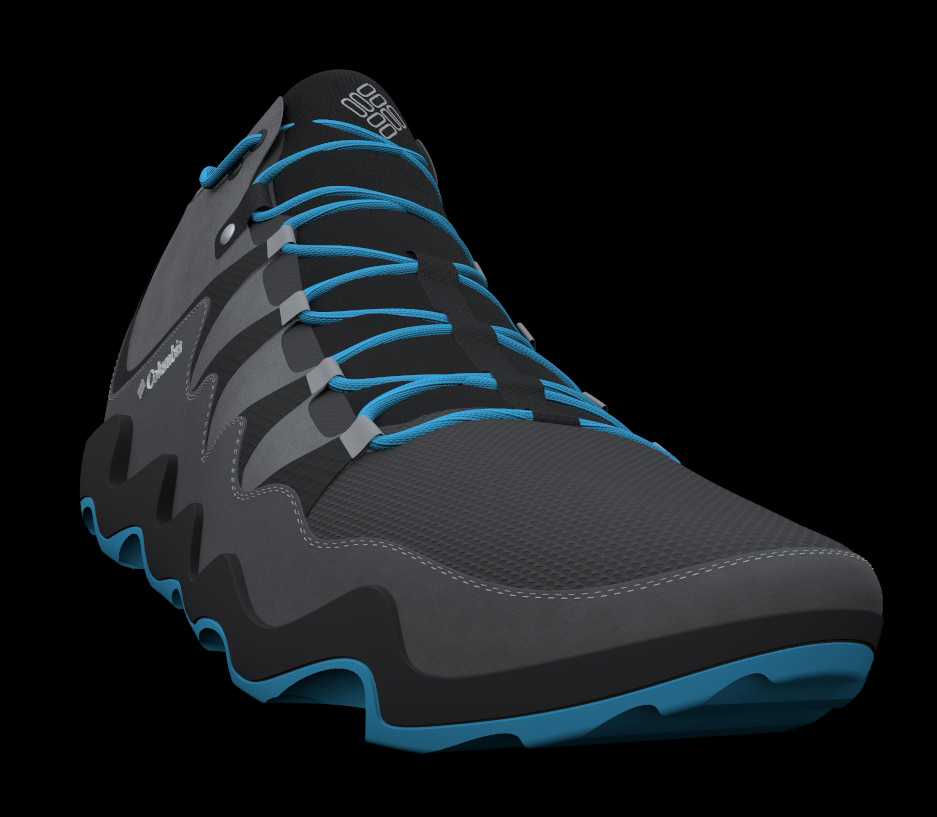 You’ve been a really great supporter of the PolyPlane.com. Thank you for that. Is there anything in particular that has made you want to stick around for so long?

I have stuck around because you have a quality product. As someone who has spent some time on several similar sites, I can confidently say yours has some of the most accessible Rhino tutorials yet.

Thank you! The emails I get from people seem to really parallel that sentiment. I’m glad I can help the community! Do you have any interesting side projects you can share?

Sure, I quite like the way my new Brooks ‘Advanced Runner’ concept is coming along. The goal was to come up with a lightweight, contemporary running shoe putting emphasis on cushioning and upper breathability. Still a work in progress though. 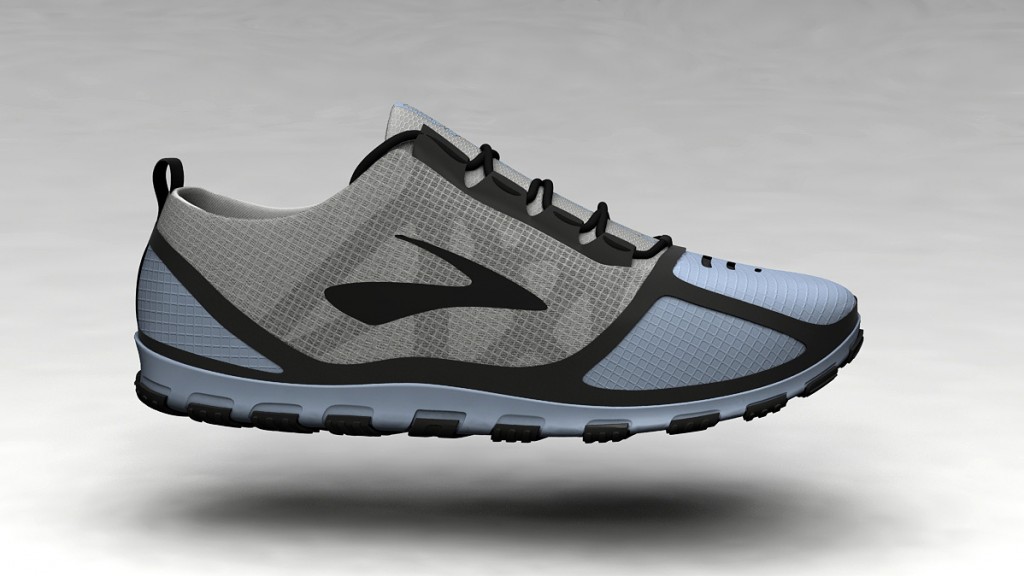 What advice would you give to someone who wants to get into 3D modeling and doesn’t know where to start?

Oh gosh… Ok, I learned this the hard way; there is no substitute for a solid foundation. When I started out, I wanted to create complex models and renders out of the gate without doing the groundwork. The result was a lot of modeling without truly understanding what was going on.

The other thing I would advise a beginner to do is to temper expectations. You will not be a master in all areas of 3D right away. Instead try to break it into manageable goals e.g. modeling, lighting, UV and then texturing.

Spend some time on theory. The 0,0,0 video touches on it and sites like ‘The Guerilla CG Project’ take it even further. Overall, be patient because it can take a little while to start seeing the results that you want.

I’m a huge fan of the method that the Guerilla CG Project uses. It’s right in line with the philosophy of PolyPlane and CCD. With that said, what, if any,critical role does 3D modeling play into the actual design process of your project(s)?

I designed a package not too long ago, presented it to the client, made a few changes and voila! This streamlined the whole process and ended up being a cost effective solution since the client didn’t have to make a lot physical samples to help him decide on the ‘right look’ – we took care of that with the help of our ‘virtual studio’ which produced some compelling product shots. We ended up using the same assets for advertising purposes later on.

Its great that you can use assets like that over and over. Do you have a favorite recent project? If so, can you share some images from it?

I did a personal project involving sunglasses just to expand my portfolio. It looks simple, but it’s one of the more challenging models I have ever dealt with.  There are subtle details in there that will go unnoticed but I’m proud of. 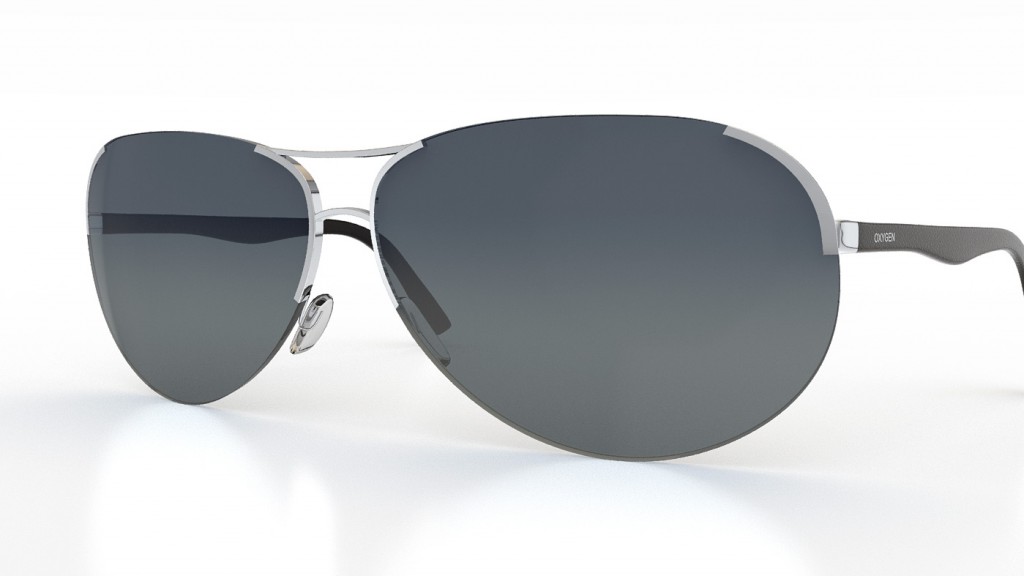 You just touched on something that I talk about a bit in Sketch to Model 2 — subconscious details. They really do help sell a visual. If you had to start all over again in your education as far as using a 3D modeling software, is there anything you’d do different?

The truth is that people learn in all kinds of ways. We can talk about logical pathways of approaching the subject but there really is no set formula. So if my advice doesn’t work for you, try something else. Ultimately if your interest is genuine, you’ll figure it out eventually. I had many false starts but I stuck with it, and here we are.

When you are getting your idea out of your head and into the computer, do you draw first or jump right into modeling?

Oh I would be lost without 2D references. I start with an idea and a lot of iterations of that idea in my head. I narrow it down to 2 or 3 ideas that I put down on paper. The sketches are further refined in Adobe Illustrator and the output from that is what ends up in the orthographic view of my 3D application.

I couldn’t agree more with that approach; sketch first then model. Those sketches can be on paper, in photoshop or even little 3D sketches like 3D Pro Ben Nicholas talks about here. Sindiso, thanks so much for taking some time to discuss your passion for design and 3D! I wish you luck as you continue to move forward with your career! If you’d like to get in touch with Sindiso, he’s putting together a site soon, so check back here and I’ll update this as soon as it’s up! 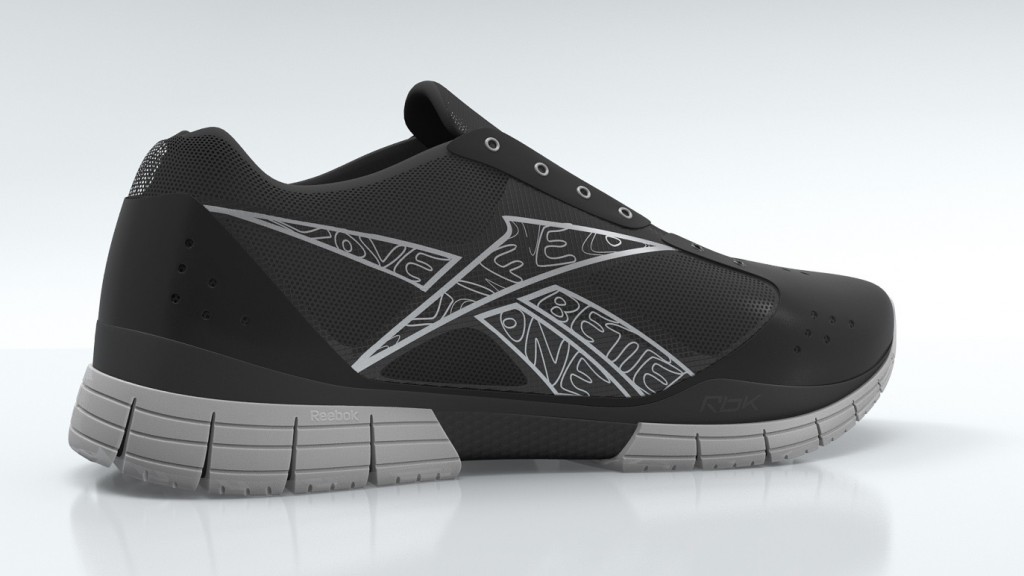 Are you a professional 3D artist or fan of PolyPlane? I’d love to talk with you about your work! Reach out to me here and maybe you, too, will be featured in the Reader Highlight!